Putting Together A Routine With A Hyper Pup 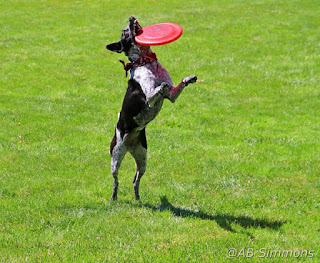 So there you are, trying to work on your routine, but you have a high-drive dog. No, I mean, among the high-drive dogs, she IS a higher-drive nutcase of a fun dog. And with high-drive dogs, sometimes it's hard to set up or design routines with how frantic they can be at first.  But it's only at first, because as you work developing a routine, she should calm down or at least become a bit ore predictable on the freestyle field.

Besides, it's all about the fun, right?

So first off, when designing a freestyle routine, keep in mind that a full routine is nothing but a few different sets of moves or sequences strung together.

For example, a "routine" could consist of three, four or five different segments, or more, depending how many moves you put into a segment. Segments are also easier to work on with your dog because she can then focus on those few cues first until she gets it. Then when you have one segment feeling good, you can introduce the next one.  Once you feel fairly good about the second segment, test it, see if she gets it when you string the two together. Then you go from there!

Breaking a freestyle routine into segments makes it easier to grasp rather then the entire routine. For both of you.

Remember, no matter how much you train for or memorize a routine or set of segments, you will forget something. It's all good, because if you train with enough segments, you'll always have a backup plan when your brain goes blank. Right?  (The answer is right.)

Bottom line it... it's learning how to have fun with your pup! Right?  (The answer is yes here too!)

Variability In A Freestyle Routine

One example of a weak point could be if you continually forget to execute other throws/releases besides a backhand. If that's one of your issues, then start out your routine with a series of releases to open the routine. There, you got that out of the way. Now you can go into the next series of moves, maybe your one or two vaults. Or not. It's up to you.

Remember, we're learning how to have fun playing with your pups, making it fun for them too.  Are we noticing the theme here yet?

So we started this piece talking about hyper pups... and constructing a routine around that off-the-charts energy.

First, remember, it's a fine balance between crazy hyper and focused. It's hard (for me) to blend those lines. Sometimes it's just time and training and training and training. In my early days I formatted my routine almost out of a defensive posture, in response to my pup's energy and taking advantage of what he wanted to do.

From another angle sometimes you can use that hyper energy to your advantage, without burning your dog out too fast during a routine.

Say you want to set your pup up for a thigh vault, but because she's so wound up and eager, it's hard to set her up in the right spot. Fine, if she's that wound up, then while you kneel to set up for your vault, throw out a short toss in the direction you want her to come from, then when she gets it and turns around, you've got her lined up so when she returns, she will then see your cue for whichever vault you have in mind, and wallah!

And that is fun, when you can execute a fun move.


All pups have their sweet spots for catching a disc in the air, placement for vaulting and the like. It takes time to figure those spots out, which is why I always suggest vaults from your side and not behind you... so you can watch and figure things out. Once you have it figured out, then you can start looking to vault from behind you.

At least that's what worked for me when learning the vault timing.

Remember, vault training can be dangerous for everyone involved so keep it sane and as safe as possible. And when vaulting your dog, it's better that she starts or vault a few feet away rather than right next to you. It's easier for them to lop up and over rather than having to jump more vertical to get to your thigh or back.

And work on keeping your back as flat as possible. It will feel weird at first, but I feel it's critical to present a stable surface that the dog knows she can trust.

Learn to use verbal and physical cues when setting up routines. Each cue can represent a specific move or set of moves so make sure you create distinct or unique cues that trigger your set of moves.

Remember to work your different disc releases without your pup... practice that "put the dish in the cupboard" move to help stabilize floating releases.

Practice with runs going back and forth, going around you, through your legs, weaving, what not... just so you don't have an out and back routine. Don't bore the freestyle judges. You want them to stay awake to see what you have to offer. And usually, you have more to offer than you know.

Always be aware of the wind. If it's too strong, you don't throw with the wind, where it will suck the lift off your disc, making it crash before your pup can catch it. You'll want to put your short tosses into a breeze, where it will most likely help it float.

If you're worried about your catch ratio, put that disc in a solid, safe spot where you can be confident of your delivery and your dog catching it (In her sweet spot).

Playing it safe but delivering various releases can go far. 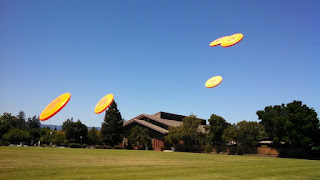 In freestyle, when you are allowed seven discs (or whatever the limit is where you are competing), it is imperative you have all the same brand/model of disc. This helps in your own consistency when handling the discs. That last thing you need is your fingers tripping up while grabbing a disc whose lip is slightly different than the last disc you just tossed. Whether it be a $2 fastback from Pet Food Express (Yes, those discs are the real thing that the sell) or a SuperAero from Hero Disc USA, you should have about 10 of the same disc that you don't share with other dogs or use in training. Though, for hard biters, the SuperAero can outlast a hard biter. My SuperAero's have lasted a few years easy, and that is with daily use.

The "SuperAero K9 Candy" is the only disc I'll use for my pups unless I'm forced to a different kind due to a competition's requirements or rules. And yes, they do that.

With that in mind, there are two kinds of K9 Candy discs (It's their new name for the disc). The new, perfect version that costs $15 ea., and the blems, which cost $7 each. The only catch with the blems, is that you don't get a color option when you order. (Unless you call in and make an order over the phone and you're real nice to them! They'll try to work with you.) And what's a blem? It's just a disc that got a bad or funky label or some insignificant flaw that would never impact your game. The only trick is...  they are not always available. The offering comes and goes, so if you see them, you may want to grab 'em when you see them.

But considering how long they last, I don't even think the $15 price is a bad one. But sometimes life and your wallet might have more things to say about that.

The Pet Food Express Frisbee / Disc. are great for working with client dogs and what not but these will die an ugly death like any other hard disc with a hard biting dog. But they're only $2!!! Great for handouts.

Oh, and check out this starter bag for holding your discs, on Amazon. If you might be so inclined!

So far, I have not encountered a comparable disc that my does not destroy in a few sessions, or will put up with.  OH, and take a sharpie and put your dog's name, your website, org or what not on the inside of the disc. That way, when we're all warming up, no one gets confused about whose discs are whose, and it keeps everyone honest!

Did I leave anything out?

Oh, it's all about the fun! 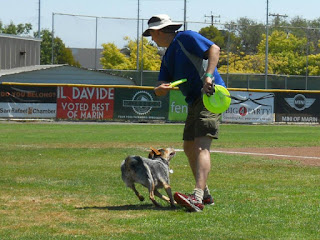 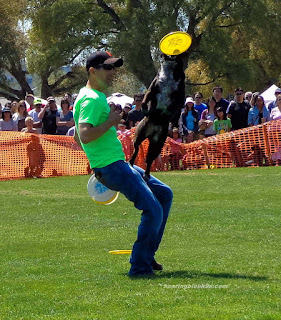 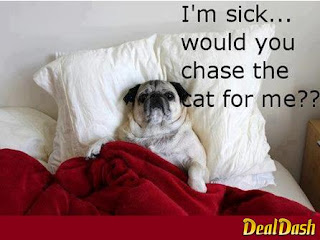